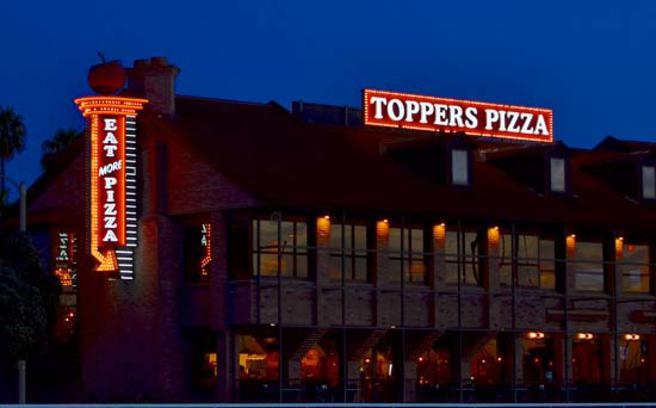 Before LED signage, there were only neon signs – the original type of illuminated lighting. Custom neon signs have been used in advertising and other displays for over 100 years, and they’re still preferred by customers who love their retro look and feel. Atlanta Sign Company, United Signs creates signs for clients in a variety of industries, and we’re excited to go to work for you. Please read on to learn more.

Our staff will work with you to create the neon signs that meet both your commercial and aesthetic criteria. We employ a trained and talented Graphics and Design staff who will determine the ideal dimensions for your custom neon signs, and a fabrication staff who will manufacture your neon signage. We also perform all installation and maintenance, eliminating the need for costly third-party services. We’ve served the Southeast  since 1981, providing all services from our expansive North Georgia facility.

Neon signs are produced by bending glass tubing into shapes. A craftsman skilled in this craft is known as a glass bender, neon or tube bender. The neon tube is made out of 3-4 foot (1 meter) straight “sticks” of glass tubing. Creating neon signs is a cottage industry and an eclectic art.

The neon sign is an evolution of the Geissler tube, which is an electrified glass tube containing a “rarefied” gas (the gas pressure in the tube is below atmospheric pressure). When a voltage is applied to electrodes inserted through the glass, an electrical “glow discharge” results. Geissler tubes were quite popular in the late 1800s, and the different colors they emitted were characteristics of the gases within. They were, however, unsuitable for general lighting; the pressure of the gas inside typically declined in use. The direct predecessor of neon tube lighting was the Moore tube, which used nitrogen or carbon dioxide as the luminous gas and a patented mechanism for maintaining pressure; Moore tubes were sold for commercial lighting for a number of years in the early 1900s.

Are Neon Signs Dangerous? This is a common question, but Neon and argon gas by them are not dangerous; they are inert. As with standard fluorescent tubes, the minute droplets of mercury present in some colors are safe as long as the tube is not broken. Improper handling can be a threat to both the environment and health. Many modern neon shops refuse repair of broken argon-mercury tubes for this reason. Neon is powered by voltages in the 2,000 to 15,000 volt range. Even though the current is in the milliamp range, if a neon piece is not properly mounted, wired, and insulated this voltage poses both a shock and fire hazard. This is an area where cheapness does not pay off. A well-constructed neon piece should be problem free for many years.

How Neon Signs are made

Neon Signs have been around since the early 1900’s, but most people don’t know how they are made. Neon restaurant signs and neon bar signs have been helping business advertise for almost a century. Neon signs are most prevalent in restaurants and bars, but they have many other uses.

Neon signs are made of glass tubes. These tubes are either mass-produced or hand blown by a master glass blower. The glass tubes have to be heated up and skillfully twisted and curved into various shapes or desired molds. They are then made into a vacuum and two electrodes are placed inside on opposite ends of each other. Next, one of five different gasses is filled into the vacuumed tube that is then sealed. When an electric current passes through the electrodes, the gas illuminates and light is emitted.

When deciding on the color of a neon sign, it is important to think about the use of the sign. Determining whether or not the sign will be outdoors is crucial, because most of the gasses used in neon signs will not work properly when it is cold. Out of the five types of gasses Neon is the most durable. Have you ever wondered why businesses mostly have red neon signs outside? Well it is because they are the strongest against change in temperature.

United Signs have been constructing neon signs for over 90 years. It is because United Signs expansive knowledge that they are able to repair signs as well as craft them. Neon sign repair costs can be pricy, but United Signs restoration and maintenance team makes sure to give a fair estimate. Give us a call at (678) 203-6044 to find out how we can help you create or restore your neon sign!

The History of Neon Signs

Neon signs have been a part of American history since the early 1920’s; however the neon sign did not originate in America. One of the first forms of lighting was discovered in France with barometric light. Germany also played a major part in the creation of the neon sign with the invention of the Geissler tube in 1855 and finally, the Edison of France paved the way for neon signs in America.

The beginning of neon sign technology dates back to 1675 with the French astronomer, Jean Picard. Picard discovered a faint glow from inside a glass tube filled with mercury. The phenomenon was called Barometric light and was caused by electrical discharge coming from the movement and splashing of mercury inside a glass tube. This light was intensified by the impurities of the mercury. Although the cause of barometric light could not be explained at that time, the scientist did conduct further investigations. Later, when the concept of electricity had been perfected, scientists were able to move forward with new forms of lighting.

In 1855 a German glassblower and physicist named Heinrich Geissler invented the predecessor of neon tubes, known as a geissler tube. The geissler tube was very similar to today’s neon lights. The tube consisted of a partially evacuated glass cylinder tube that was crafted into various shapes and filled with rarefied gases and contained two electrodes on both ends. When an electrical current was added, the gas would emit light. Heinrich Geissler made this possible because he designed a more effective way to make a vacuum. With his hand-crank mercury pump and his superior vacuum glass tube, he created the first electric discharge lamp.

The Edison of France

Georges Claude was a French engineer and inventor that started the development of neon signs. Claude is known for being the creator of the Claude system for liquefying air. Because of Claude’s new system it was now easier to manufacture mass quantities of rarified gases. These gases were needed to make neon signs. Also, because of this new system, the purity of the gases increased.

In 1910, after years of trial and error, Claude perfected the art of neon lighting and decided to patent his idea. During December of that same year, Claude took his invention to the Paris Motor Show to display his new neon lights. The convention had thousands of incandescent lights and there was Claude’s two 40 foot neon tubes glowing red and seen from all angles of the competition grounds.

Claude acknowledged the fact that neon would never serve as common lighting, but he knew that it would have a place in the advertising world. In 1923, Claude sold two of his signs to a car manufacturing company in Los Angeles. Neon signs quickly caught on as a popular form of advertising in the U.S. Because neon signs can be visible even in daylight, this new form of display fascinated the public. By the 1930’s neon signs became more common and the more extravagant signs towered over downtown areas throughout the United States. Las Vegas took to the elaborated neon signs in the 40’s and 50’s, as neon signs had become more colorful and animated than ever. By the 50’s, neon signs had reached their peak in popularity and could be found outside many diners and hotels.

To shape these glass tubes to form words or images or designs, they are heated with lit gas and forced air. The temperature of this heat can reach approximately 3000 degrees! The natural color neon gas produces is red, however now more than 150 colors can be produced. After red was produced, the colors blue, white, and gold followed. Georges Claude is awarded as the actual inventor of the first neon sign. Claude was a French engineer, chemist and inventor. It is noted in an article written about the history of neon signs that, “he was the first one to use an electrical current to a sealed tube of neon gas in 1902 to make a lamp.” Neon signs quickly became a large part of history by the mid-20th century. This form of outdoor advertising was unlike anything anyone had ever seen before. Before neon signs, carpenters literally hand carved signs to place in front of small family owned businesses.

How do Neon Signs work?

A neon sign is constructed of a vacuumed glass tube filled with rarefied gasses, meaning that the gas pressure in the tube is well below atmospheric pressure. These gasses, which vary, determine the color of the sign. The tubes are then sealed and two electrodes are placed on either end of the tube. When an electric current passes through both of the electrodes, the gases inside illuminate and produce light.

Can Neon Signs Be Displayed Outdoors?

Yes, there are outdoor neon signs. Neon signs can be place outside, but they need to have a clear plastic covering over the tubing to protect the tubes from the elements. The plastic covering also keeps the electrical components safe.

Are Neon Signs Visible In Daylight?

Are there any dangers with Neon signs?

The gasses inside of the tubes by themselves are not dangerous. The amount of mercury that is used in making certain colors is safe as long as the tube remains intact. This being an electrical device it does have a shock and fire hazard potential, so it is important to always handle a neon sign carefully. When mounting, it is important to mount the sign correctly to avoid any of these problems.

Is There Anything That Can Be Done To Maintain Neon Signs?

It is always a good idea to clean or dust off any sign. It is recommended however, that you unplug the sign before any cleaning.

Can Neon Signs Be Dimmed?

Yes some neon signs can be dimmed. The brightness of a sign can be controlled by the amount of electricity running through the electrodes.

Neon sign cost can vary. The main factors in price are determined by how big and how complex the signs will be.

United Signs has been constructing signs for over 30 years. Because of United Signs expansive knowledge, they can construct and repair neon displays. Unlike many sign companies, United Signs has an in-house neon Sign pro, that creates can customize your neon sign. Sign repair costs can be expensive, but United Signs restoration and maintenance team will give you a fair estimate. For more information, please give us a call at (678) 203-6044 to find out how we can help you create or restore your signs.

Our highly-rated company looks forward to creating the neon signs that you need. Fill out our quick quote form to receive your FREE, no-obligation estimate or call us with your neon signage requirements today.